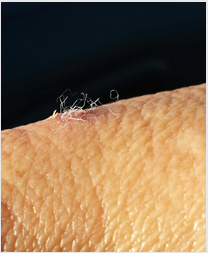 Morgellons disease is a controversial, unexplained skin condition. Here you’ll find answers to common questions about Morgellons and suggestions for coping with it.

Morgellons disease is an uncommon, poorly understood condition characterized by small fibers or other particles emerging from skin sores. People with this condition often report feeling as if something were crawling on or stinging their skin.

Some doctors recognize the condition as a delusional infestation and treat it with cognitive behavioral therapy, antidepressants, antipsychotic drugs and counseling. Others think the symptoms are related to an infectious process in skin cells. Further study is needed.

People who have Morgellons disease report the following signs and symptoms:

The intense itching and open sores associated with Morgellons disease can severely interfere with a person’s quality of life.

What do researchers know about Morgellons disease?

The research on Morgellons by multiple groups over decades has yielded conflicting results. Multiple studies report a possible link between Morgellons and infection with Borrelia spirochetes.

These results contradict an earlier study by the Centers for Disease Control and Prevention (CDC), which concluded that the condition isn’t caused by an infection or parasites. The CDC study of 115 people with Morgellons, which the CDC refers to as an unexplained dermatopathy, showed that most of the fibers in the skin wounds were cotton. The CDC report noted that the condition is most often seen in middle-aged white women, and its symptoms are very similar to those of a mental illness involving false beliefs about infestation by parasites (delusional infestation).

Small research studies have tried to determine the cause and effective treatment for Morgellons disease. But there is still no proven guidance on diagnosis and treatment. Further research is needed.

Common attitudes of health professionals toward Morgellons disease include:

The signs and symptoms linked to Morgellons disease can be distressing. Even though health professionals may disagree about the nature of the condition, you deserve compassionate treatment. To manage your signs and symptoms:

to definition
Marianne J Middelveen1
Melissa C Fesler2
Raphael B Stricker2
1
Atkins Veterinary Services, Calgary,
AB, Canada; 2
Union Square Medical
Associates, San Francisco, CA, USA
Abstract: Morgellons disease (MD) is a skin condition characterized by the presence of
multicolored filaments that lie under, are embedded in, or project from skin. Although the
condition may have a longer history, disease matching the above description was first reported
in the US in 2002. Since that time, the condition that we know as MD has become a polemic
topic. Because individuals afflicted with the disease may have crawling or stinging sensations
and sometimes believe they have an insect or parasite infestation, most medical practitioners
consider MD a purely delusional disorder. Clinical studies supporting the hypothesis that MD
is exclusively delusional in origin have considerable methodological flaws and often neglect
the fact that mental disorders can result from underlying somatic illness. In contrast, rigorous
experimental investigations show that this skin affliction results from a physiological response to
the presence of an infectious agent. Recent studies from that point of view show an association
between MD and spirochetal infection in humans, cattle, and dogs. These investigations have
determined that the cutaneous filaments are not implanted textile fibers, but are composed of
the cellular proteins keratin and collagen and result from overproduction of these filaments in
response to spirochetal infection. Further studies of the genetics, pathogenesis, and treatment
of MD are warranted.
Keywords: Morgellons disease, dermopathy, Lyme disease, Borrelia burgdorferi, spirochetes
Introduction
Morgellons disease (MD) is a disfiguring and perplexing skin condition associated with
spirochetal infection and tick-borne illness.1–7 This poorly understood condition has a
worldwide distribution, with estimated self-reported cases numbering over 14,000 in
2009.5
Since that time, there has been an increasing number of individuals reported
to be afflicted with this disorder (C Casey, Charles E Holman Morgellons Disease
Foundation, personal communication, 2017). The distinguishing diagnostic feature of
MD is spontaneously appearing ulcerative skin lesions that contain unusual filaments
lying under, embedded in, or projecting from the skin. The characteristic filaments
are microscopic, visually resembling textile fibers, and are white, black, or a more
vibrant color, such as red or blue.1–7 In addition to fiber production, some patients may
experience formication, described as stinging, biting, creeping and crawling sensations.
The symptoms of MD are not limited to the skin. MD patients experience a variety
of systemic manifestations, such as fatigue, joint pain, cardiac complications, cognitive difficulties, and neuropathy, all symptoms that are commonly reported by Lyme
disease (LD) patients.1–7
Correspondence: Raphael B Stricker
Union Square Medical Associates,
450 Sutter Street – suite 1504,
San Francisco, CA 94108, USA
Tel +1 415 399 1035
Email rstricker@usmamed.com
Journal name: Clinical, Cosmetic and Investigational Dermatology
Article Designation: REVIEW
Year: 2018
Volume: 11
Running head verso: Middelveen et al
Running head recto: Morgellons disease
DOI: http://dx.doi.org/10.2147/CCID.S152343
Video abstract
Point your SmartPhone at the code above. If you have a
QR code reader the video abstract will appear. Or use: